This evening was “INOG” evening in Dublin, an evening I always look forward to, not least the quite brilliant event venues the meetings seem very often to be held in. INOG:12 was no different as we assembled in the really cool “Dogpatch Labs” located in the “CHQ Building”. 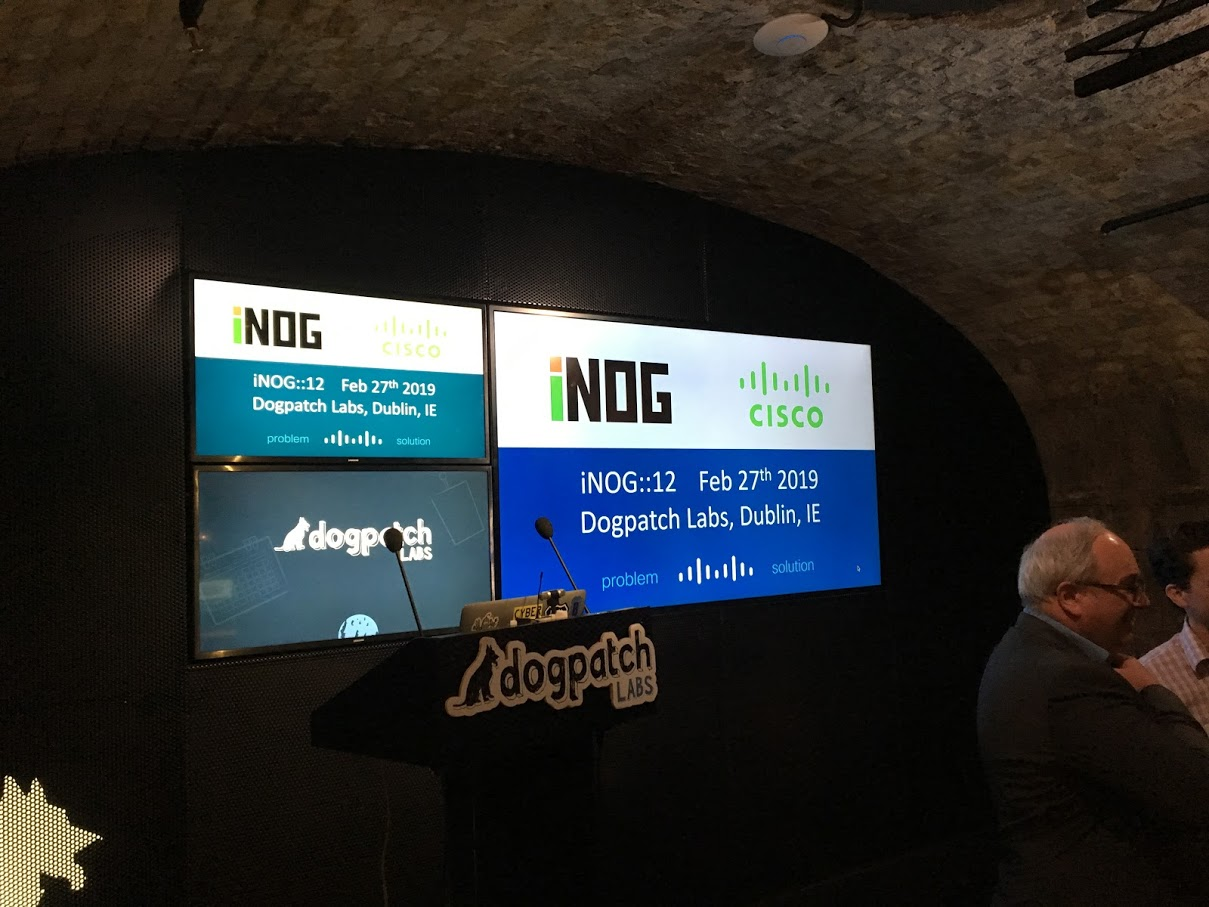 Following the customary introductions and “Code Of Conduct” was read out by [“Donal (@irldexter)”] (https://twitter.com/irldexter) the first talk this evening was from George Ryan. George is COO of “FIT”. This lightning talk had the sole purpose to make us all aware of the organisation and indeed the fact that they are operating a pay and learn Technical Apprenticeship programme and skills partnership.

They are a not for profit organisation which has helped roughly 80k worth of people in Ireland to date and boast approximately 50% of that figure in the workforce (mostly in the Tech Industry) following graduation from the apprenticeships.

There are options of focus in pathways to all of;

It’s a magnificient organisation that is seeking to put in place a formal route into Tech as a career for people throughout Ireland (Nationwide programmes) that for one reason or other haven’t chosen to go to University in search of a degree or similar.

Those that know me know that I’m a big fan of Jason and indeed “NetworktoCode” generally. Jason updated us all on where things are at currently in the industry in respect of network automation generally. He spoke of the often silo like pockets of behaviours that can exist even with a single team in the same organisation. Something like this; 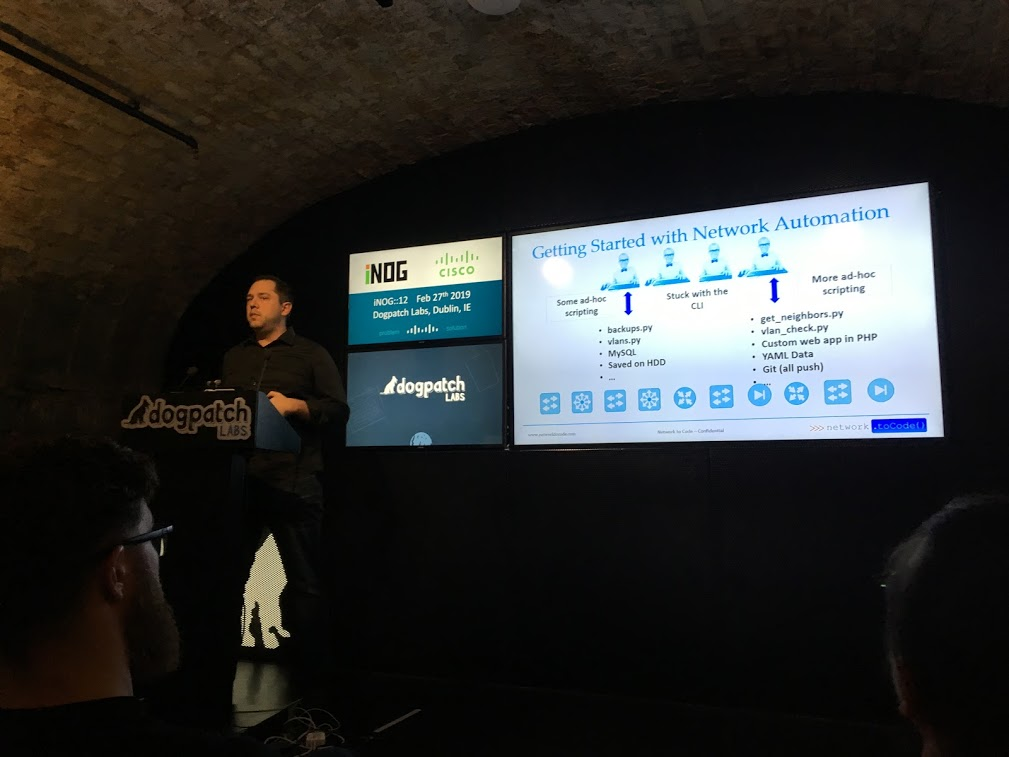 Jason then offered up a potential “future state” which if you’re a client of NTC you might well be familiar with in the form of a demo. The concept is that the Enterprise’s IT Se rvice Management system (ServiceNow was used in the demo), Ansible Tower and Slack are all at one in ITSM & Chat Driven Network Automation 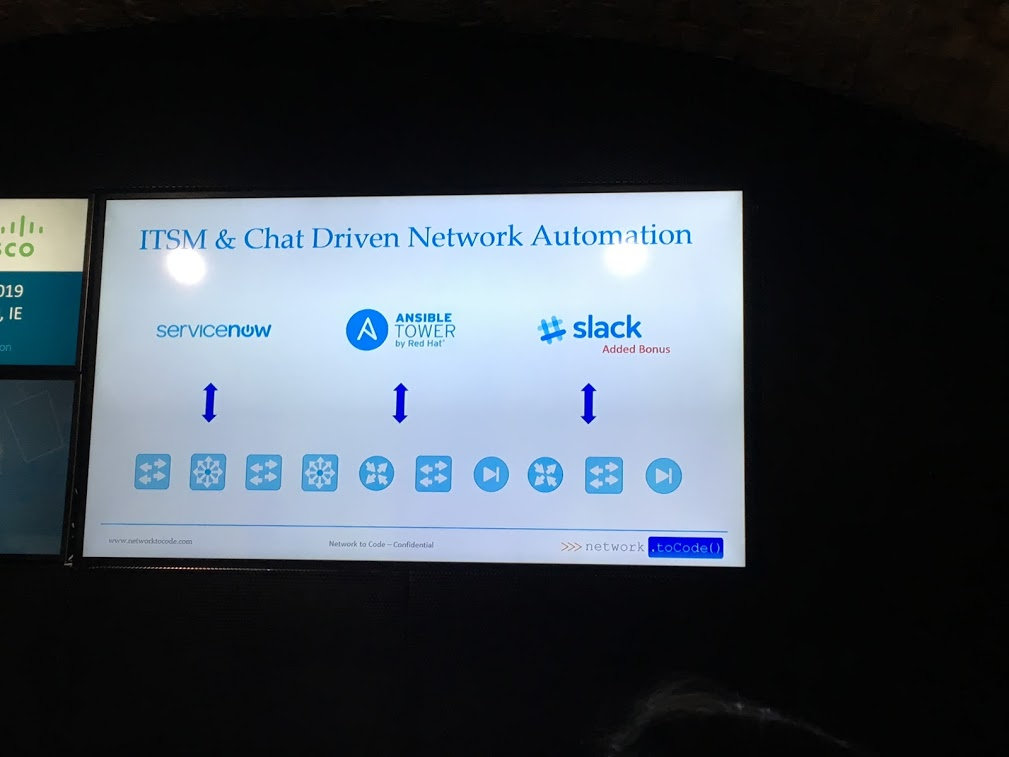 When utopias like these become available it’s hard to believe there’s still huge organisations still managing and maintaining massive portions of their network via SSH still. Jason showed us live a;

Laura Nolan - Is there an ethical crisis in Tech?

Next up was Laura Nolan, ex of Google, who posed the very topical and relevant question - “Is there an ethical crisis in the technology industry?” 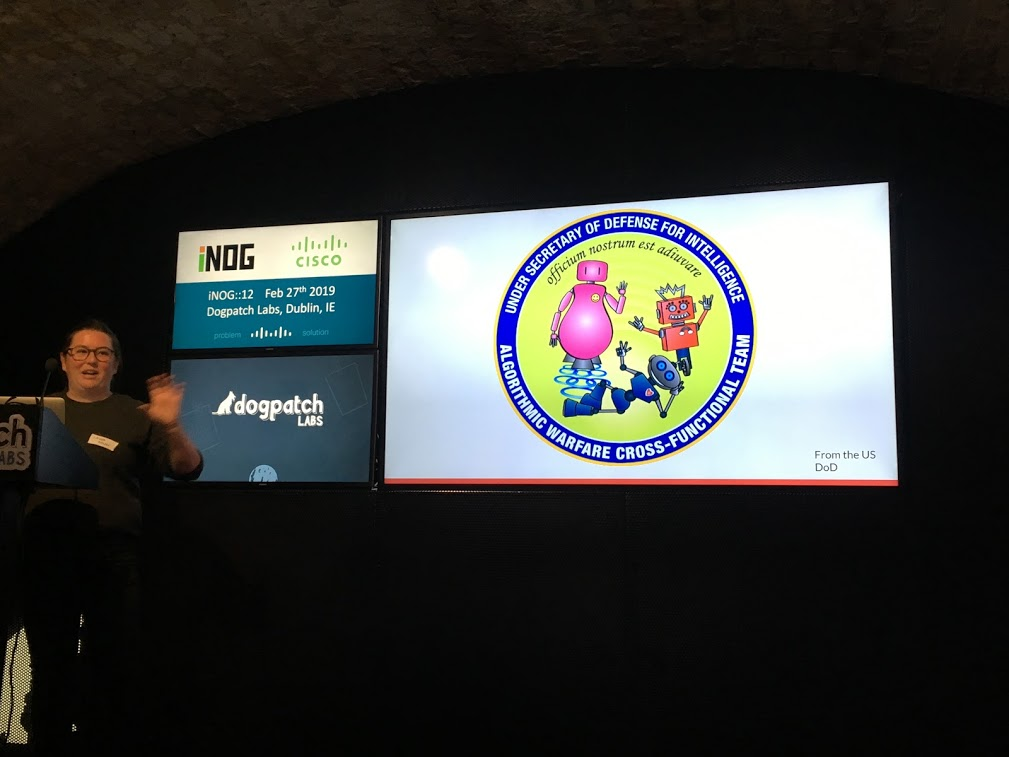 Laura was brave enough to resign from a very good job as a Site Reliability Engineer in Google following the “Project Maven Scandal” last year. She informed us all that she was in fact a proud signatory along with the thousands of Googlers who wrote an Open Letter to their CEO simply stating that;

** GOOGLE SHOULD NOT BE INVOLVED IN THE BUSINESS OF WAR! **

The talk highlighted a project which Laura explained the folks in UBER had undertaken a few years back called “GreyBall”. The initial thinking behind this project was such that it sought to learn about the users of the App to identify other angry PSV drivers that might take a dislike to UBER drivers and attack them. All on the face of it a pretty noble enough idea and one that sought to protect the lives and health of their drivers. However, what it became Laura explained, was a method for the company to circumvent PSV Regulation in the various countries that they operate. Something clearly not in keeping with good ethics.

Following Laura was “Oliver Herms of Exaring AG” with a talk he delivered at “DENOG10” about his very novel idea of providing a solution to probe / monitor your network end to end using stacked GRE Tunnels and MPLS Packets.

The talk centred around his “project on GitHub called Matroschka Prober” which I personally think is class - so get using and contributing to it. 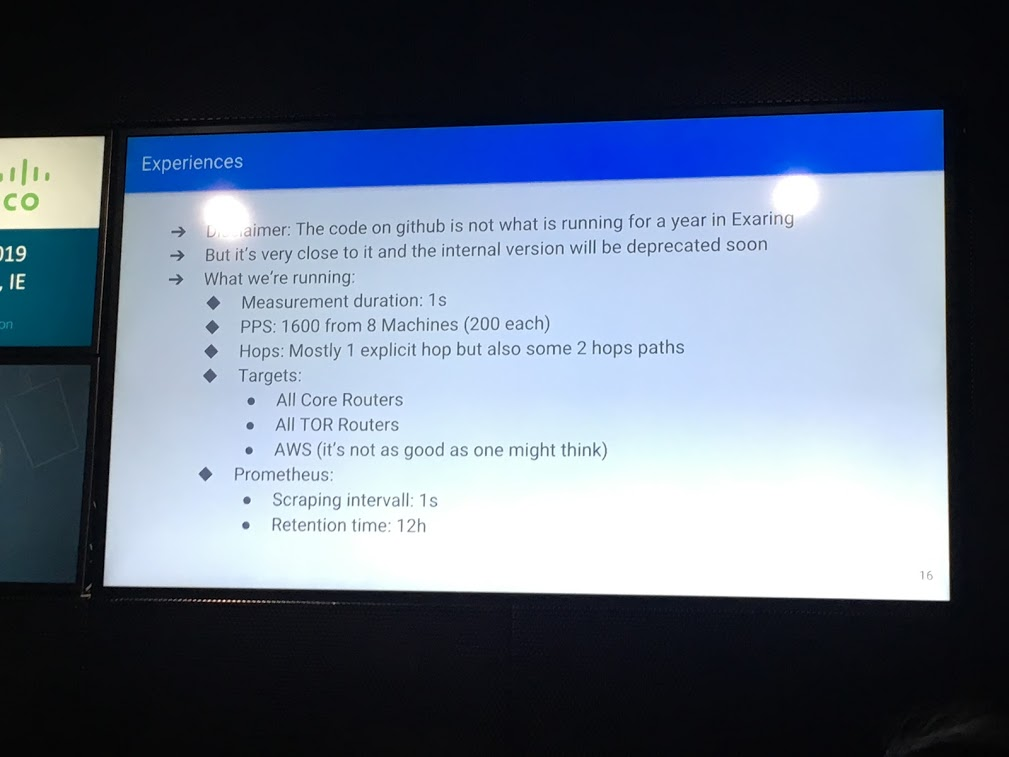 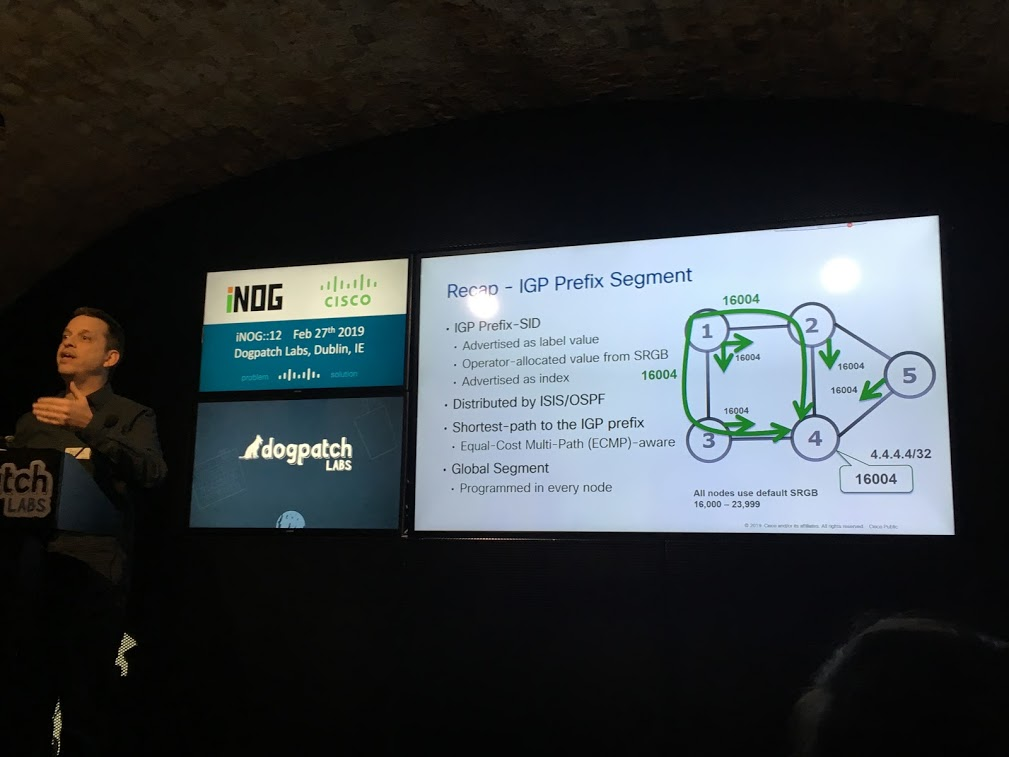 The formal part of the meeting was concluded with a thunder talk from the meeting sponsor Cisco. Jose Liste who’s one of Cisco’s Lead Technical Marketing Engineers on “SR IGP Flexible Algorithm”. Segment Routing is a powerful concept in itself and Jose brought to the meeting some of Cisco’s latest advances in what they refer to as Flex Algo. The mission statement of this mechanism is to Bring complex traffic engineering to the masses The concept is very good and I look forward to test driving it in the future if I get some spare time! 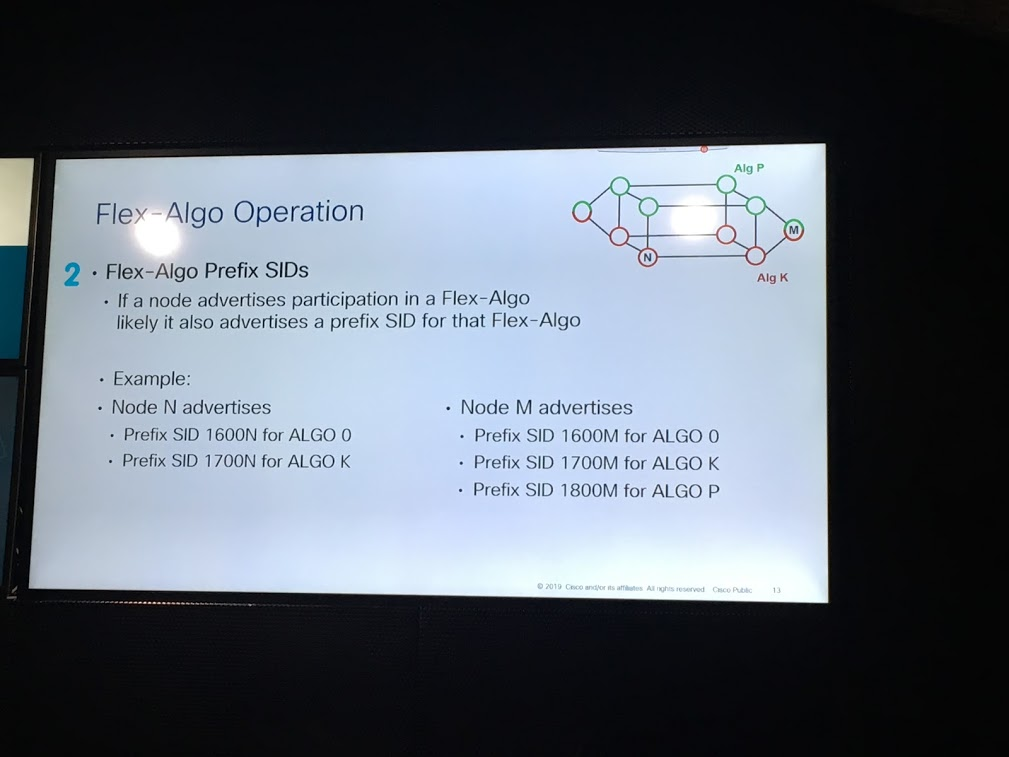 There is already a very good “video demo” produced by Cisco available on the http://segment-routing.net website which Jose talked through too if you would like to take a closer look.

Social on the Mezz

As with any of the “INOG meetings”, equally as important to the organisers as the Formal Talks section is the Social Section. We moved up from the “vaults” to the “Mezz” area on the 1st floor. Very cool space and one take lent itself well to community building and extending the conversations. The presenters all stayed around and were happy to field questions from attendees and general have a dialogue with people of a beverage of their chosing.

Next time the meeting will be held on 6th June 2019 in “Indeed” HQ in Grand Canal Dock. Look forward to seeing you all there.